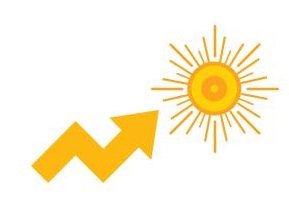 While the growth is welcomed good news, Washington is only ranked 25th for total solar capacity and total solar capacity installed in 2014. One might come to the conclusion that this is due to a lack of solar exposure in a state known for lengthy cloud cover, but that is not the case.

According to the report, Lighting the Way III: The Top Ten States that Helped Drive America’s Solar Energy Boom, every state in the U.S. receives enough sunlight to fulfill several times its energy needs; however, the states ranking highest for most solar energy per capita were states that had policies allowing more and more businesses, homeowners, and communities to adopt solar energy.

In a recent interview, Cecile Gernez, Solar Campaign Organizer with Environment Washington, explains, “We’ve got plenty of sunshine. Combine that with plenty of commitment to clean energy policies, and Washington can light the way on solar.”

The solar energy report by the Environment Washington Research & Policy Center lists the top 10 states for solar energy. Nine out of ten of them (Hawaii, Arizona, Nevada, California, New Jersey, New Mexico, Vermont, Massachusetts, and North Carolina) have robust laws allowing solar customers to sell their excess power via the solar grid. All 10 of these states have renewable energy requirements.

The presence of solar power has tripled within the last three years nationally. It’s also creating new jobs more quickly than the overall economy. In the last year alone, it has employed 2,400 people in the state of Washington.

Washington could begin to lead in solar energy if these initiatives were extended and/or a minimum standard for solar energy were set for the state. Environment Washington urges state leaders to commit to sourcing at least 10 percent of the state’s energy from solar power by the year 2025.

Under the Obama administration’s Clean Power Plan, state limits on carbon pollution from conventional power plants (such as coal and gas) were finalized last month. The plan also provides incentives for Washington to increase its solar energy development. Research from Environment Washington indicates that solar power could meet about 50 percent of the pollution reduction targets set forth in the plan.

“Solar power can play a major role in the biggest step our country has ever taken to address climate change,” said Gernez. “That’s why our state legislators should ensure we become leaders, not laggards, when it comes to clean energy.”

How Difficult Is It to Make the Leap to Energy Storage?